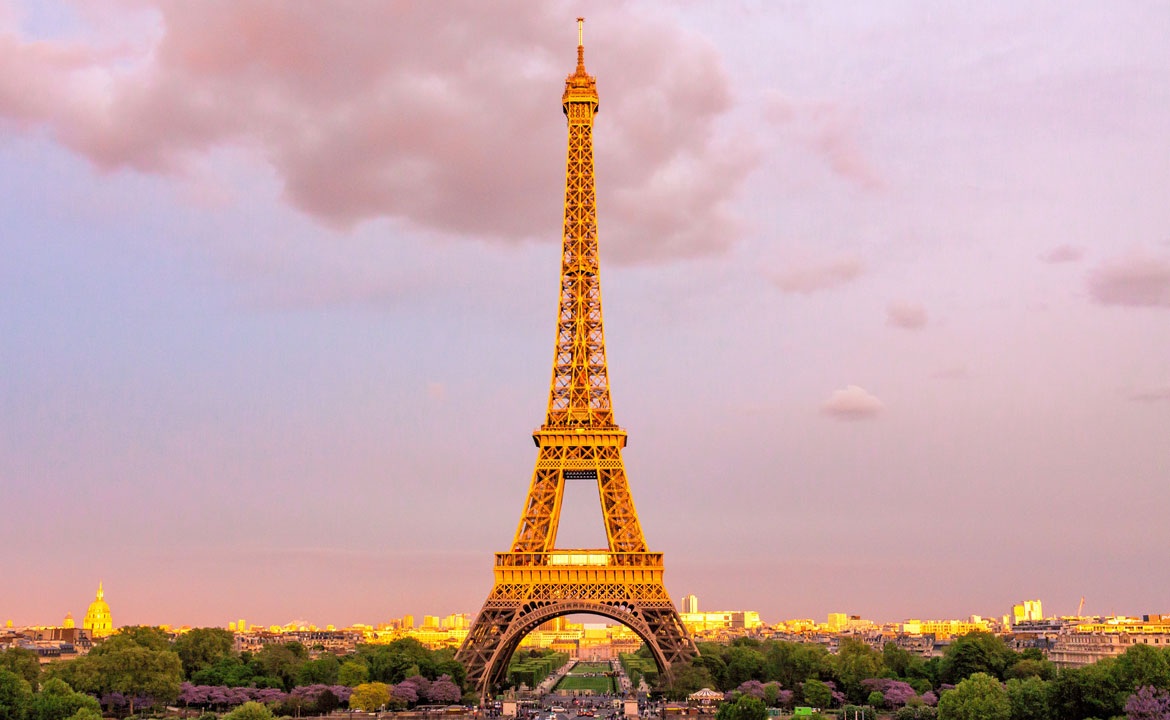 It was said: “They have only erected the framework of this monument, it has no skin”.

Designed by and named after the French engineer and bridge builder Alexandre Gustave Eiffel (1832 – 1923) for the Paris Exposition, 1889, the tower is 300m high making it the highest man made structure of the time.

It was inaugurated on March 31, 1889 and would have remained the tallest structure but for the completion of the Chrysler building in 1930. However, it remains the most recognized structure in Europe today and was the most popular attraction of the Exposition of 1889. Built in celebration of the French Revolution of 1789, it consists of an open iron framework.

It was nearly never built

Eiffel discovered that after awarding the contract the Exposition Committee was only willing to grant about one fourth of the funds required to construct the tower.

Eiffel was left to fund the balance amount himself. On the condition of sole ownership and control of the profits for the next twenty years, he agreed to find independent funders for the tower. Surprisingly, the tower was paid off within the first year itself.

Had Eiffel not expended his efforts to strike this deal the tower might not have been constructed at all. Considered an abomination by many art and civic leaders, it was said: “They have only erected the framework of this monument, it has no skin”

The entire conception of iron and only iron being a beautiful, ‘architectural marvel’ ruffled quite few feathers in the architectural community. Distinguished cathedrals and palaces have been built out of stone with carefully crafted ornamentation adorning them.

Iron definitely can be used for construction as an underlying structure as in the case of the Statue of Liberty. But, exposing your underbelly to the world by using only an iron framework was just poor taste.

A Committee of Three Hundred was formed and they petitioned for its demise:

“Honored compatriot, we come, writers, painters, sculptors, architects, passionate lovers of the beauty of Paris — a beauty until now unspoiled — to protest with all our might, with all our outrage, in the name of slighted French taste, in the name of threatened French art and history, against the erection, in the heart of our capital, of the useless and monstrous Eiffel Tower.

Are we going to allow all this beauty and tradition to be profaned? Is Paris now to be associated with the grotesque and mercantile imagination of a machine builder, to be defaced and disgraced? Even the commercial Americans would not want this Eiffel Tower which is, without any doubt, a dishonor to Paris.

We all know this, everyone says it, everyone is deeply troubled by it. We, the Committee, are but a faint echo of universal sentiment, which is so legitimately outraged. When foreign visitors come to our universal exposition, they will cry out in astonishment,” What!? Is this the atrocity that the French present to us as the representative of their vaunted national taste?”

And they will be right to laugh at us, because the Paris of the sublime Gothic, the Paris of Jean Goujon, of Germain Pilon, Puget, Rude, Barye, etc. will have become the Paris of Monsieur Eiffel.

Listen to our plea! Imagine now a ridiculous tall tower dominating Paris like a gigantic black factory smokestack, crushing with its barbaric mass Notre Dame, Sainte Chapelle, the Tour Saint-Jacques, the Louvre, the dome of Les Invalides, the Arc de Triomphe, all our humiliated monuments, all our dwarfed architecture, which will be annihilated by Eiffel’s hideous fantasy.

For twenty years, over the city of Paris still vibrant with the genius of so many centuries, we shall see, spreading out like a blot of ink, the shadow of this disgusting column of bolted tin.

It may have taken every bit of those twenty years to change some people’s minds. All of the other iron buildings built for the Exposition were torn down shortly after (a shame). Today we look upon Eiffel’s tower as anything but hideous. Mary Louis King calls it “a monument to nineteenth century architectural engineering and a frank display of structure and material.” *

By today’s standards of engineering the tower looks over engineered, as iron is ultimately an inferior material. Therefore, a single beam was unable to withstand the large tresses. The simple beauty of this quaint behemoth is derived from this very weakness itself. Upon closer look, you can see an approximate replica of the cellular structure of a plant in the tight lattice work of beams.

The process of converting iron to steel was discovered by Sir Henry Bessmer in 1855. This converted it into a lighter and stronger material but practical implementation and mass production took still many years.

Eventually steel went on to replace iron as is evident from the skyline of most major cities. In 1885, fours years before the Eiffel tower was created, the world’s first skyscraper was already built in the form of the Home Insurance building in Chicago by William LeBaron Jenney.

Jourdain Girard, Architect
Jourdain contributes towards local magazines and newspapers. He is an architect working for over 22 years in Paris. He enjoys and seeks beautiful architecture and writes about them.