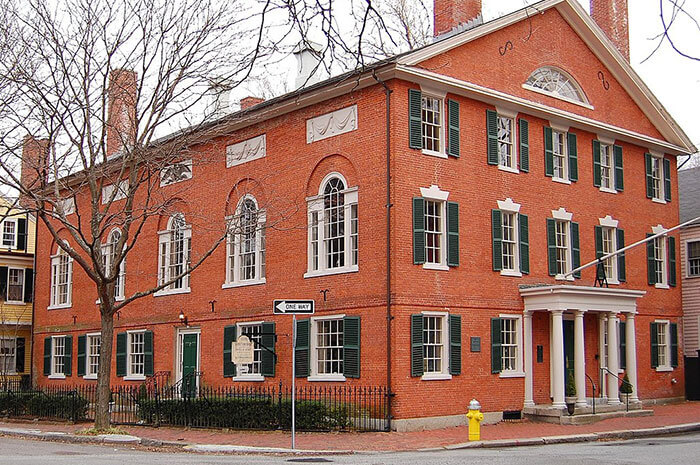 Hamilton Hall, Salem. Photograph by Fletcher. Image used under the Attribution-ShareAlike 3.0 Unported (CC BY-SA 3.0) license. No changes were made to this image.

If you take a walk down Elfreth’s Alley in Philadelphia, you’ll be met with with quaint brick homes, festooned with ornate front facades and elliptical fanlights.

But what is Federal architecture, and what are its primary features? In this article, we’ll cover it all, so you know what to look for when constructing Federal style buildings.

The Federal style, also called the Adam style, dominated the architectural landscape in the US from about 1785 to 1820. Some consider it a variation of the Georgian style, which sprang up in about 1700.

Federal architecture was a kind of revival of Roman architecture, and is often associated with Benjamin Latrobe and Thomas Jefferson. It eventually became a popular style for governmental buildings.

Generally, the term “Federal” refers to a period in US history when the Federal system of governance was being set in motion. During this period, many buildings came up that were influenced by popular architectural styles and elements in Europe.

Where Can You Find Federal Style Buildings?

If you want inspiration to construct a Federal-style building, you can find this type of architecture in many port cities, where there was a focus on developing efficient housing in well-planned cities.

Furthermore, Federal-style buildings are scattered along almost every city on the East Coast, from Georgetown to the seaport towns of New England. Some prominent Federal buildings include Tudor Place (1815) and Decatur House (1819) in DC, and Woodlawn Plantation (1805) in Virginia.

If you want to see the oldest Federal-style house in the US, look no farther than the White House. Of course, this iconic structure is more ornate than most Federal homes, but the columns flanking the entrance are typical of the more elaborate Federal houses of the time.

Whether you’re constructing a Federal style home or government infrastructure, here are the key elements of Federal architecture.

One couldn’t be blamed for confusing a Federal home for a Georgian home. After all, many Federal features were borrowed from Georgian architecture, such as the symmetrical windows and flat façade.

However, there are a couple of ways you can tell them apart.

Whether you’re going for government building design or residential construction, here are the details you need to know about what works for modern Federal style structures.

Architectural landscaping can help further refine the look and feel of the building, as well as increase the property’s resale value.

Living or working in a Federal-style building can give residents or workers a feeling of dignity and stateliness – all reflected from their surroundings. We hope this article has given you some inspiration if you are considering a new construction.

Ready to construct a gorgeous building with the help of architectural construction documents? Contact us now!